De El Pocho - agosto 15, 2014
Today marks a key milestone in Bee project: we are realizing Bee main sources and libraries to the public sphere! Do not get too excited yet. This is stated as a pre-release, because many things are yet missing and as the license is CC-BY-NC (for now). Also, there's no way to browse code like in a complete smalltalk environment, nor to rebuild the kernel.

You can consider this as just a small preview of what the system is going to be like internally. There are two kinds of files: SLLs are the binary smalltalk libraries, SMLs contain the source code of their respective libraries. bee.sll is the main executable (it is just an .exe file, you can rename and double-click). In case no arguments are passed, a *REALLY* basic command line interface is shown, where you can enter some Smalltalk code:

bee will load the nativizer and compiler and try to compile and execute the file sources. In linux (with wine) you can write a script like:

You can also execute:

which will load the library (allowing to execute code without loading the compiler and nativizer). I think the most interesting thing to look for now are the implementations of the primitives. You can go to your favourite smalltalk to inspect

and then check in bee.sml how we implemented them (be sure to look at the bootstrapped version and not the Host VM one, we are writing both for now).

SLL files may or may not contain native code. In the case of the Kernel library (bee.sll), course native code is present (because you require some machine code to execute). Also, the JIT contains native code (to generate native code you also need a native native code generator).  Anything else doesn't require native code (but may contain it). For example, for now the compiler doesn't contain any native code. When loaded, the nativizer generates machine code just in time when methods are executed.

That's all for now, I'll be showing more details at ESUG, see you! 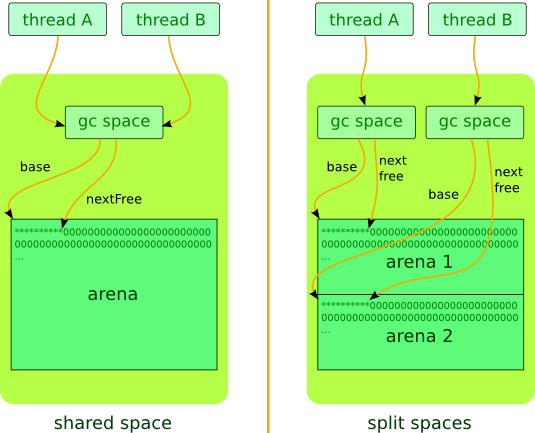 A Smalltalk runtime that is able to execute concurrent sequences of code would be very useful. Seeing the rise of multicore/multiprocessor hardware and the direction the industry is taking, increasing the amount of cores in processors each year, makes us think we should be prepared. The simplest way of making use of multiple cores is to just avoid threads and directly work on multiple processes, connected by some kind of IPC. This is easier because different processes share nothing, except what you explicitly choose. Isolation helps program safety concurrency wise, as two fully separated processes cannot have race conditions between them. Then you would ask, why not just use processes? The main reason is that threads can be lighter and, in some way, more straightforward (as different threads share all their memory and resources). But also the question can be stated conversely, why not threads? Giving the option of using threads would be nice, so why not? There are lots of VMs wand
Leer más